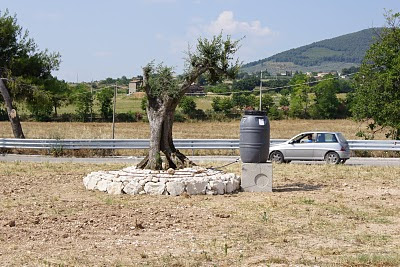 The Comune (local council) of Trevi has recently built two roundabouts in Borgo Trevi. These were built and left without any landscaping being done.

I have been mutterlng darkly under my breath that given that Trevi is the olive oil centre of Umbria the least the council could do would be to plant a few olives in the centre of the roundabouts.

Just last week my words were half heeded and this strangely shaped olive appeared in the centre of one of the said traffic islands. I like the stone base on which it is mounted but I think the watering system just detracts a little from the overall effect.