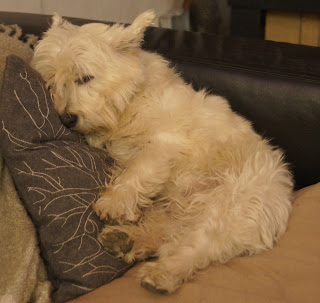 I felt a little like this today at the monthly farmer's market in Trevi. Crumpled.

Anyway the market was held as usual in Piazza Mazzini and one of the restaurants there, Taverna Delle Sette have been having their own tripe festival in conjunction with a chef from Florence which is the tripe capital.

I must admit that I didn't partake but it did look like real food. Chef took a small bread bun, divided into two and removed the bread from the top half. Then placed cut tripe onto the base and pushed down so the juices we're absorbed into the base. The on the hollowed top half of the bun he added some liquor in which the tripe had been cooked and then there was the option of salsa verde and/or chilli sauce.

Email ThisBlogThis!Share to TwitterShare to FacebookShare to Pinterest
Labels: Shattered and tripe