Today was one of those perfect early spring days where it was warmish, 12 degrees, and absolutely still so you could hear the birds calling, slightly desperately in my ears, people chatting as they foraged for asparagus/edible roots, the snip of pruning clippers, the occasional roar of a chainsaw as some serious pruning was undertaken and Winnie whining as she starts obsessing that there lizards behind every shutter of the house.

Whilst I pruned, Rachel did the garden equivalent to bring some of the borders back under control but as she says this is more hacking than pruning. 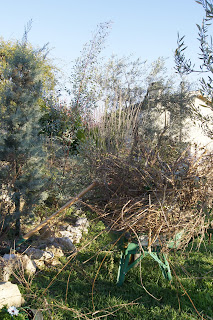 Email ThisBlogThis!Share to TwitterShare to FacebookShare to Pinterest
Labels: Hacking