We went down to see some friends who live near Pescara over the weekend to celebrate an 60th birthday.

Unbeknown to us a stray dog had taken up residence outside their house and was sleeping under their car. They were feeding it but we not able to look after it permanently themselves having already a fairly large menagerie of pets.

They had checked with neighbours etc and had notified the council who were going to come and take him away at some point.

He was white, young and very very cute. Trying his very hardest to get adopted. And so he has. Here is the new addition to Casa Margherita life - Ugo. 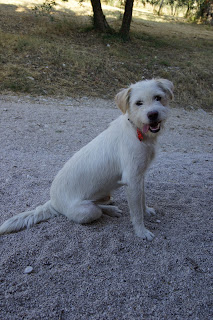