We went as usual to the market in Trevi on Friday and ended talking to someone who lives in the central storico. He was saying that whereas now Trevi has one alimentari (general provisions stores) and one butcher and 2 bars, there were previously three of each.

This decline is caused by two factors. One is the rise of the supermarkets which is a common factor in other locales as well. The other is the fact that populations in the old town centres are diminishing. They are no longer where people want to live. This is a situation that is common across Italy.

I think this is a shame but I must declare my hand here. It is the local family owned stores that sell my olive oil so I am biased in that regard.

Hopefully the new Trevi council can somehow incentivise people to live in the centre again. Either that or we just have to wait until it is fashionable gain as surely it will be. 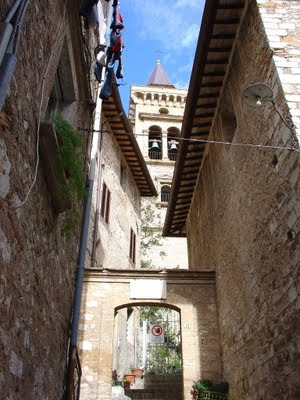